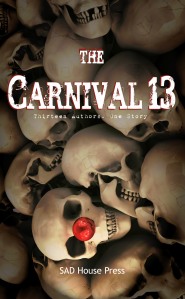 That’s right boys and girls, your dreams of madness and the macabre have come true!  Today SAD House Press is honored to release its first title, The Carnival 13.  The book is benefitting Scares That Care.  They are a charity that helps with toys, money, or other items for sick children.  To learn more about them and the awesome work they do, check out their website (ok, you can click here, I’ll make it easy on you).

From the back cover:

Come one, come all! Step right up and join thirteen masters of macabre literature as they take you on a journey unlike anything you’ve ever traveled. We’ve got freaks, fantasy and fear; all lined up waiting to take your breath away.

All proceeds to benefit Scares That Cares!

And now for your pleasure, I have an excerpt from John Everson’s opening chapter…

From Chapter One – John Everson

“I hate fuckin’ carnivals,” Brian said to a captive audience of clothes. They hung silently on their hangers, steadfastly refusing to comment. He absolutely did not want to go to the carnival. His clothes weren’t going to argue. But that didn’t change the fact he had to get dressed.

The colorful B & S Enterprises trucks had started unloading and setting up the tilt-a-whirl, Pirate’s Delight, and Bumble-Bee Bop rides in the Blackburn Mall parking lot on Wednesday. Polly had seen them on her drive to work after school. As much as Brian hated the damn things, he wasn’t going to let her see that, not after Polly had asked – with big gosh honey please eyes – if they could go. He was sure his face had lost all expression when he’d realized what she was begging for, but he’d gained control before letting her see his game-losing stare.

“Uh, sure!” he’d somehow managed. And Polly, excited about the idea of cotton candy and watergun balloon games, had managed to ignore or completely miss the look of frightened, anxious “Oh God, please no!” on her boyfriend’s face for the second it had appeared.

He rolled his eyes in the silence of his room and pulled his American Idiot concert t-shirt from the hanger. Somehow it seemed appropriate.

Fifteen minutes later, he was forcing a smile on the doorstep of Polly’s place. When she came to the door, light brown hair perfectly tousled over her shoulder, wearing a tight pink t-shirt and blue cut-off jean shorts, Brian’s forced smile changed from false to full-on for-real. She looked delicious.

“Don’t be too late,” her mom called from inside the house.

Polly turned and flashed an “oh puh-leez” look behind her. “I won’t,” she promised. Then she took his elbow and pulled him toward the driveway. “C’mon,” she said. “I want to get there before dark!”

Brian took another look at her glowing smile and even brighter eyes and decided that as much as he hated carnivals, this was going to be an amazing night.

The mall parking lot was already packed when they pulled in and were directed off the asphalt to an impromptu lot in the neighboring field. The carnival itself straddled both the asphalt and the long, normally empty grass to the west of the mall. It was the first real heat of summer, and everyone in town was ready for a party. The visiting carnival gave them a good excuse, and they didn’t pass it up. It looked as if everyone in Blackburn had turned out. The buzz of the crowd was already loud above the festive music of the midway. Brian and Polly stood in a long line at the ticket counter for 10 minutes before a ticket-taker – oddly garbed in clown makeup, with pitch-black fingernails – snapped up their money and slapped down two generic red rectangles that said ‘Ticket’, proving they should have entrance.

“Can we get cotton candy?” Polly asked, as soon as they stepped past the ticket booth.

“Sure,” Brian agreed, and led her across the asphalt to an electric pink cart just a few steps away. A man in a white coat and hat was busy swiping a cardboard cone around the inside of the glass cart, gathering up strands of spun sugar to create a hive of sweet cotton for someone waiting just on the other side of the window. The air around them throbbed, alive with tinkling bells, calliope music, and the screams and laughs of people diving and soaring not far away on one of the big oval rides that took you up into the air almost to the moon before suddenly dropping down to the earth in a pendulum arc that looked guaranteed to end in a crash to the pavement. Lights caught them, blinded them in hazy yellows, reds and blues and then were momentarily gone.

They were in the center of it all, and Brian knew that his trepidation, no, alienation about the carnival, was not going to find a receptive ear here. All around them people were having a blast.

They eventually made it to the concessions cart’s window and as the white-clad man spun sugar onto a paper cone for his girlfriend, the hair on the back of Brian’s neck stood up straight as a voice from behind yelled out, “Polly! What is up, girl?”

It was Francis Blellingfield. Brian knew that without looking….

The book was a blast to put together and I didn’t realize exactly how much goes on behind the scenes of a book until now.  If this does well, maybe…maybe another one might be on tap.  Enjoy the book, keep checking out the Coffin Hop and the other authors and artists for the next few days (here).