Ken MacGregor has an aberrant mind.  There, I said it.  He’s also a superb author who laughs at fear.  Ken has stopped by to share a little with you about how fear and laughing go together like peanut butter and jelly.  This tie between the two runs very deep in his work and he does it well.  So, without further delay…

Laughing all the Way to the Grave

Some things are universally shared, no matter who or where in the world you might be: love; anger; laughter; fear. There are others, I’m sure, but I want to focus on laughter and fear.

As children, we laugh almost from day one, and though it typically wanes as we grow older, I think most of us laugh throughout our lives. I’m planning to follow the Viking tradition and die with a joke on my lips. If I were an especially good Viking, I’d also die in battle surrounded by the corpses of my enemies. I’m not sure I’m that committed to the analogy, but I guess we’ll see. So, yeah – laughter is a big part of our lives.

Fear is another thing we feel as babies. When you’re that small, pretty much everything that’s not Mom or Dad is terrifying. Everything is unknown to us and therefore scary. So, naturally, we try to figure out what the scary thing is by putting it in our mouths. Some people never seem to get over that.

And, we don’t stop being scared of things as we grow up, do we? We get better at coping with fear, but it never goes away. It, too, is a big part of most people’s lives.

I have an unpleasant little anecdote for you: back in the late ‘90s, I was sharing an apartment, platonically, with an ex-girlfriend. We had suffered an awful break-up years before, but managed to patch up our friendship. Deb was engaged to a good friend of mine who had moved to LA to pursue an acting career. She planned to follow him when she got out of school. We both worked at the same place, so we carpooled. Deb introduced me to the woman who would later become my wife, for which I am eternally grateful.

Anyway, Deb came down with pneumonia and was sick for several days. It was so bad, she had to go to the hospital. One morning, I went in to wake her up for work and she was pale, cold and stiff. This good friend, this woman I had lived with and slept with (back in the day) was dead. She was 28.

After her funeral, my friends and I sat in the van and talked about the Catholic service. Someone asked why they rang the bell during Communion. Liz, my then-girlfriend explained that was supposed the signify the exact moment that Christ enters your body. Another friend busted out with the following:

“Ding! Your Jesus is ready!”

We all cracked up. And the jokes came fast and hilarious after that. We needed them. We needed to laugh, because we were grieving, in pain, and all too aware of our own mortality. We were scared.

I think we need fear to keep us safe. Fear makes us fight or run when we’re in danger. It’s a survival tool.

I think we need laughter to keep us healthy. When we are scared or angry, when we despair – when we feel like we’ve got nothing left, we can always laugh.

So, while I do enjoy scaring people (and I really do), I like to soften the blow by making them laugh, too. Also, I think the laugh is way bigger

when you’re a little scared to begin with.

An Excerpt from An Aberrant Mind by Ken MacGregor…

Cain stands motionless, surveying the damage. He absently rubs the mark on his cheek; it has been there a long, long time, but he’s not likely to forget the day he got it. Cain inhales through his nose; he has come to appreciate, even enjoy the sharp coppery smell of fresh blood. He lifts a foot, shakes some of it off the toe of his Italian loafer and steps back across the threshold. A job well done, he thinks, and drops the heavy cleaver on the floor. The blade thunks into the wood. As his footsteps fade, the flies begin to gather for the feast.

“I know,” Adam says. “But what can we do? No one can touch him; you made sure of that.” He is careful to keep his tone respectful; he is stating a fact, not admonishing. One does not admonish Him.

THERE IS A LOOPHOLE.

“Really?” Adam arches a perfect eyebrow. “You never mentioned this before.”

I DO NOT ENTIRELY TRUST YOU, YOU KNOW.

“Yes,” Adam sighs. “I know. You hold a grudge better and longer than anyone.”

I DO EVERYTHING BETTER AND LONGER THAN ANYONE.

GET YOUR MIND OUT OF THE GUTTER.

Adam laughs, then gets serious.

THE MARK WILL ONLY AFFECT THOSE BORN AFTER CAIN. ANYONE OLDER THAN CAIN MAY DO HIM HARM WITHOUT CONSEQUENCE.

“Okay,” Adam says. “But, there are only two people older than Cain.”

Adam stares at his Creator for a long moment.

ALL OF HUMANKIND ARE YOUR CHILDREN, ADAM.

“Technically, sure,” Adam said, “but I wasn’t their father. Not really. Not in a hands-on, kissing boo-boos, singing to sleep, teaching about the world way. Not in any way that counts.”

YOU ARE THE ONLY ONE WHO CAN DO THIS.

DO NOT SPEAK OF HER IN MY PRESENCE.

“I always forget how much you hate her.”

I DO NOT HATE. I AM LOVE. STILL, YOU WILL REFRAIN FROM SAYING HER NAME. IT ANNOYS ME.

“Of course,” Adam says. “Whatever you say. Since I seem to be the only choice, what would you have me do, exactly?”

Adam sighs. It’s no use arguing with God. You never win.

ABERRANT is defined as unusual, abnormal or different. The stories in this book not only differ from most of what you read, but also wildly from each other. A retired school teacher takes on an elder god and his minion; a werewolf picks fights with sea creatures; a neighbor’s lawn may be eating people. Twenty-two stories: scary, funny, weird and different.

In these pages, you will find darkness and fear, revulsion and terror. Mixed with it, however is quite a bit of humor. Sometimes both happen at the same time. So, open it up, join Jim as he fights off zombies with a potato cannon; witness the bloodbath reunion of the first man and his homicidal son; enjoy the monsters, the demons and the deranged.

A word of warning, though: you may never eat a bagel with lox again.

Available for purchase at:

ABOUT THE AUTHOR – Ken MacGregor’s work has appeared in over fifty anthologies, magazines and podcasts. Ken is a member of The Great Lakes Association of Horror Writers and an Affiliate member of HWA. You can find Ken on Amazon, Goodreads, Facebook, and at ken-macgregor.com. Ken’s the kind of guy that, if he found himself stranded somewhere with you, would probably eat you to survive. Ken hopes you enjoyed the stories in this collection and that you sleep just a little less well because of them. Ken lives in Michigan with his family and two unstable cats.

Sirens Call Publications will be giving away digital copies of An Aberrant Mind by Ken MacGregor to 5 (five) lucky winners! Follow the link to enter for your chance to win! 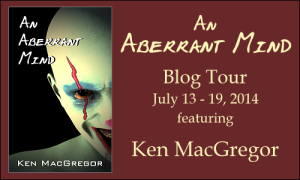 5 thoughts on “The Aberrant Mind of a Laughing Ken MacGregor”