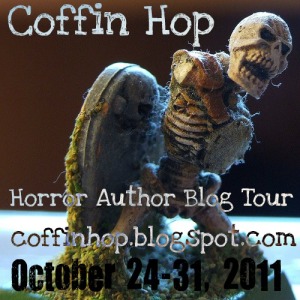 Well, tonight is the night boils and ghouls!  This night is the real most wonderful time of the year, it is Halloween.  Now that the kids have gotten their fill of candy and I prepare to take the ‘daddy tax’ from their bags, it is time to settle in for the evening.  First off, I’d like to thank Jeff Strand and John Everson for their time in helping me make your Coffin Hop in my world an exciting one.  I now want to thank you, the Hoppers, who have stopped in, commented, and joined the club.  I wasn’t sure what to expect from joining in the Coffin Hop.  I was amazed at the number of new Facebook friends, Twitter followers, and blog subscriptions happened over the past week.  It has been a pleasure hearing from each of you!  Tuesday night, I will have drawn the winner of the prize pack consisting of a signed copy of New Dawn Fades with my story “Spot Shoot”, a signed and numbered hardcover of Jeff Strand’s Fangboy, and a hardcover of Peter Straub’s Pork Pie Hat.

So, to end the Author’s of the Day, I need to play catch up since life got in the way of the last few night’s posts.  The four authors I was going to cover are Douglas Clegg, Graham Masterton, Tim Lebbon, and Simon Clark.  To make it up to everyone, instead mailing it in and giving you a BS post about them, I am going to focus on each one on their own in the coming weeks.  I do have questions for them tonight so more people can take a shot at the prize pack.  Remember, just go to the comment section and post your answer.  When the evening is through, I will see who answered first and put their name in the hat for the prize.  There are four questions for tonight, so four chances to be entered.

1.  What pen name did Douglas Clegg write under and what three novels did he write using that name?

2.  what nursery rhyme was the basis for Graham Masterton’s novel The Doorkeepers?

3.  Tim Lebbon writes about a character named Temple who is one of my favorite fiction characters.  What four novels or novellas feature Temple?

4.  Simon Clark made vampires cool by returning them to their savage roots.  Name one of the novels to star these creatures of the night.