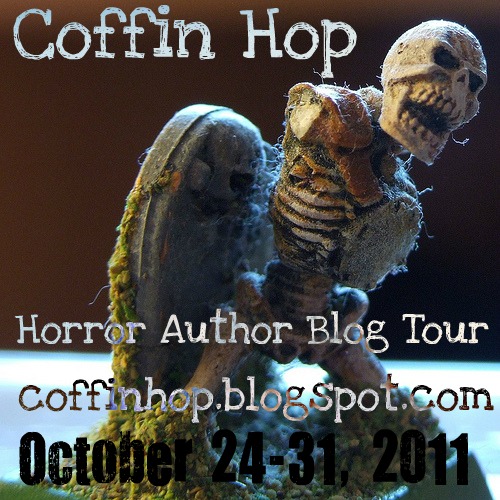 In honor of the winner, I shall use the big ass banner.  It is a shame to retire it, I rather liked it.  All of you lucky visitors have been placed into the Cubs hat (yes, the Cubs) and the name has been drawn for the Coffin Hop 2011 winner from my site.  And the winner is…Rose!  I will get in touch with her and Jeff so we can get everything set up!  Congratulations to you again and thanks to everyone who stopped by and I hope everyone comes back to visit and check for more news and release information.  Year one was a blip on the radar, year two rocked some serious ass, and year three will find me kicking the door in and taking names.  So join me as I enter 2012 with some big plans and other fun.

Pondering… A few posts ago, I reported that the anthology featuring my first accepted story had been cancelled.  This morning I found out it still has been set to be printed at some point in 2012.  I thought it was toast, so I brushed up the story (hey, I’ve learned a lot since it was written) and sent it out again.  I would rather have it come out from the original publisher from the standpoint of I’ll make more and I am not 100% comfortable with a foreign publisher.  If taken by the foreign publisher, it would be out faster, but is all about the speed?  If I withdraw the foreign submission and take the deal for more but it comes out later, am I just greedy?  I find myself on a fine line, I want the better deal, but I also want the story to get out there in the wild.  I’ll let everyone know later when I figure it out myself.