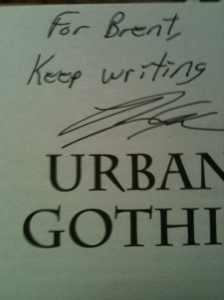 Those words are like my battle cry.  They are words from a man who I respect very much and I credit along with my friend Wesley Southard of starting this whole wild ride.  Without those two would I be sitting here now blogging to the masses?  Hell no, I wouldn’t care or have anything to say.  Wes got the ball rolling, digging up a talent I had buried, and Brian gave me the confidence to carry it forward and do something with it.  I could never thank you enough Brian for the encouragement and advise.

The market is a mess right now.  Before going forth, brandishing the banner of a completed novel, I decided to start small and work up.  The last year I have mainly written short and flash fiction attempting to find my voice and get my name out.  I have found some success with this.  There are nine stories out there now and one is already in print (if you haven’t, go pick up “Undead of Winter” with my story “A Winter’s Feast”, links are in the Biblio section to the right).

But the time has arrived.  There are still some ideas for shorts floating around, but the time has come to think bigger.  I have a short story collection in the works to submit to a place next year that will weave my “Dark Frontier” concept into a group of stories that flow as one narrative (a small peek will be in Pill Hill Press’s “Daily Flash 2012” anthology with the story “On the Wings of Darkness).  I also have another in the works that introduces my town of White Creek through the stories of local legends during a centennial celebration.  While these are still shorts, they are really different acts in a larger piece.  I have managed to complete my first novella, “In Memorium” this past year also.  I fight with myself about some story points and my pre-readers are about two to three weeks from getting it to tear apart (I’m counting on you guys-no being soft).  I also fight about “In Memorium” because the social construct that the story takes place in is very controversial and if the opening stays like it is, it will freak people out (I hope).  I have plotted out three novels and the first three chapters of the first one are complete, but this will take some time.

So, the crossroad?  I have gotten pretty used to having success with the short stories and I’m getting ready to embark on a journey that will more than likely crush my spirit.  The days of whipping a story out in a few days and getting in some place are coming to a close.  Why?  I’ve been called an “arrogant motherf**ker” in the past month and to some extent it’s true.  My goal for 2012 is to have something I don’t share with anyone else, a book of just me.  Is that wrong?  No, it is just the natural evolution of my writing career, to take off on my own.

This is where you guys come in.  Go out and support people like Wes and I, buy the books we’re in, and then review the book at Amazon (or Tweet about it, talk on Facebook about it, help get the names out).  One of the main things I’ve learned from the authors I’ve met in the past two years is to pimp the hell out of yourself.  I didn’t feel comfortable at first, but you either learn to network and get your work noticed, or you fade away silently into the night.  I choose to survive, I choose to push myself, and I choose to write for you.

So let the journey began, let’s ride the ride, and take some names along the way.

As a thank you, I am working on something for everyone who has signed up to follow the blog before Dec. 31, 2012.  I guess my wife playing Christmas music already has got me feeling like gifting the ones who were here when it all began, were here when the heads rolled, and were here before the storm. 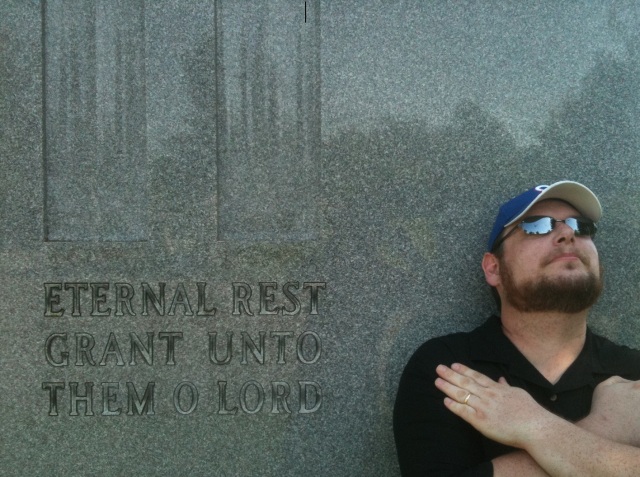