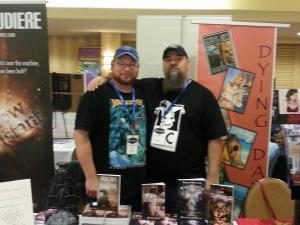 If I had a father in the author world; it’d be Armand. He picked up my first story and through his press released the original, In Memoriam. We have been in a few books together and have worked with Jay Wilburn and Jack Wallen on the Hellmouth Trilogy. In the process, we have become good friends. I owe a lot to this man and being able to write, Dying Days: Death Sentence, was an honor.

Armand is known for his zombie world through his Dying Days series.

However, he is much more than a zombie genre sensation; he is a force in the horror and crime genres also. His newest release is part of his growing horror list. One of his horror books is an evil bit of property located on Chelsea Avenue. The first book is a tightly written read that reads like a tornado and leaves you wanting more.

Well… the more is here.

Chelsea Avenue 2 has been released and it builds on a story where evil rules. Armand was nice enough to agree to stop in for some questions. It has been some time since an author has entered the Arena for the 10 Questions. I had to leave a trail of M&M’s for Armand to follow, but I got him in the Arena and he was kind enough to play along as long as he got the full M&M bag when the 10 Questions were answered.

Without any delay… let the games begin!

1. What was the story behind the writing of the first Chelsea Avenue?
-The idea for the story was born about fifteen years ago. It came from two different story ideas, which happens often. I was always interested in writing about the real Haunted Pier fire in Long Branch NJ that happened on July 8th 1987. I was still in high school. The second idea came later, about a real club I used to see metal bands play at every weekend, Murphy’s Law. It happened to be right down the block from the pier.
One day, while coming up with an idea for a new book, both ideas dropped into my head at once. It took me many more years and many false starts to finally combine the two real events into a fictional world.
2. When you began the first book, was the idea in your head for a sequel or was it something that grew over time?
-I just wanted to write this story. It went through so many different ideas and drafts and in the past I abandoned it because I didn’t think I was a good enough writer to pull it off. I think I got about halfway done with it when I started thinking of ways to make it into an even bigger story.
3. After the Dying Days and Dirty Deeds books, was it easy to get back in the mood for the sequel?
-Yes, because all three series are very different. Dying Days is about zombies and a post apocalyptic world and after writing it for so many years it became easier to just tell the character’s stories. Dirty Deeds is a crime thriller series and it has a lot of humor and ‘me’ in it, so it’s fun to write and see what happens next. With Chelsea Avenue it had been awhile since I finished the first book and it took a lot out of me. I think why it took so long for me to write a sequel is because I was scared I wouldn’t be able to write a second book that held up to the first. I think in the end I wrote an even better book.
4. Do you see more coming from the plot of land on Chelsea Avenue? It is a nasty place…
-I have the rough idea for the third and final book in the series in my head. I don’t ever outline so it might change dramatically. All of my books are tied together in the same basic mythos, so even when the series ends I’m hoping a return to Chelsea Avenue would still be in the cards for another character in another series. Who knows?
5. Now that Dying Days has concluded, do you see more series entries for your other worlds or are you going to focus on single novels?
-Dirty Deeds is an ongoing series. Working on the fifth book now wit a goal to have two new books in the series out each year. I have other ideas for new series, either horror or crime thrillers, but I don’t want to start talking about any of them until I’m sure I want to work on it. Doing a series is tough because once you start it going you need to finish it in a timely manner or the readers lose interest.
6. Switching gears… How emotional was it when you finished the last sentence for Dying Days 9?
-Honestly… it was brutal. I was very sad. As I started to finish the end chapters of the book and realized these characters were never going to be written about again, it was tough. Dying days was the series that had a big part in me becoming a full-time author. I’ve lived with this series for nine years. A ton of stories.
7. Does the end of Dying Days also close the book on zombies for the future or do you plan to take some detours into the realms of the undead?
-Right now I have no real plans to do anything else zombie. I have my Dying Days YA novella done and it will be out in June. Then in November I’ll release a Dying Days Compendium with every short story ever published as well as some unpublished and a few other surprises. Basically, every last thing Dying Days and then I’ll never write in that world again.
8. The Dirty Deeds series is great fun to read. Is it as much fun to write as well?
-It is a blast. When the beta readers read it they said James Gaffney was definitely me. I thought writing a crime thriller series without profanity, over the top violence and sex was going to be hard for me, but it’s been a great challenge I’m enjoying.
9. What has been your brightest moment as a writer?
-Besides getting to hang out with Brent Abell? Just being able to know each day I’m living my dream. Plus, I get to sit around in my Underoos all day and make up a bunch of crap that people actually read.
10. If you could recommend one of your books to the people here to pick up and read; what would it be and why.
-All of them. Is that too egotistical? I am so proud of all of them. The series I mentioned above, obviously. I’m also really proud of Keyport Cthulhu, a Lovecraftian book set in New Jersey as well. With tenuous ties to Chelsea Avenue, of course…

Bonus question:
If you, Jack Wallen, Jay Wilburn, and myself were in a cage match; who wins? This can be two parts… who do you choose and who does Shelly think would win?

Shelly wins. Shelly always wins. But if she just sat back and less us go at it there wouldn’t really be a contest. Jack would break nail and cry. Jay would try to talk us to death about his third kidney before I brutally ripped all three out ala Raiders of The Lost Ark moves, and you’d be too drunk to put up much of a fight.

Thanks for the interview, buddy! Can’t wait to see you again!