October has left us and Halloween is over, but that doesn’t mean can’t still have a little fun! On October 30th, Death Inc. launched in a nice Kindle format for you to enjoy. It is a funny take on the Afterlife and consumerism. There will be a paperback soon for all you dead-tree loving folks. Until then…enjoy!

The Grim Reaper comes for us all eventually. When he comes, how do we know it is the real deal? After eons of acting as Death, Grim has turned his job into the Afterlife’s best profession. He also ushered in an era of commercialization in the realms of the dead. Grim is now the CEO of Death Incorporated, or Death Inc. for short.

Milo Anderson is Death Inc’s newest recruit, but when he botches his first Reaping, it sets off a chain of events throughout the Veil of Souls that will leave the Afterlife reeling and the fate of the Universe on the edge of oblivion. Can Milo complete his task and bring balance back to the Veil?
Enter the new world by Brent Abell, author of the Southern Devils series and White Creek cycle. Come pull back the Veil and see a side of the Afterlife we were never taught in Sunday School. 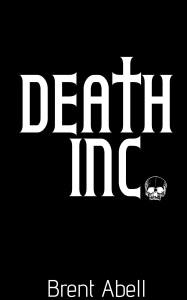 Purchase now (right here) and join the company leading the way into a new Afterlife! Grab yours now!

I’m getting pretty far in the new White Creek/Frank Hill novel, but more on that next time my friends.

Stay warm and don’t eat too much candy,