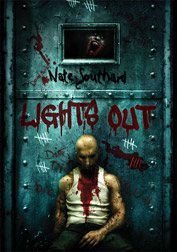 Nate Southard is brutal.  His writing is tight and visceral.  In the short time I’ve been exposed to his work, I’ve devoured almost everything he’s published.  He’s brought us the cruelty of Just Like Hell, a view from the end of the world in This Little Light of Mine, and the will to survive the monstrous in Red Sky.  It’s been one of recent works that really caught me when I read it.  Lights Out is a lean and mean descent into the Hell of Burnham State Maximum Security Prison.

Beneath the walls of the prison, two convicts attempt to dig their way to freedom only to disturb a force that’s slept for years.  Now awake, it’s thirsty and it wants blood.  So begins the tale of vampires and other monsters.  Unlike the ‘new’ vampires in todays culture, Nate gives them their horrific edge back.  No beautiful people falling in love, just pure blood lust and evil, the way it should be.

The vampires aren’t the only monsters however.  Within the walls of the prison lives the evil that manifests its self in humanity.  Diggs, Sweeny, Marquez,  and Ribisi are the men with the power within the walls.  They are the men in charge of the four gangs vying for supremacy among the prisoners.  When the bodies first start to mount up, the gangs blame each other and look to take the fight to their adversaries.  Father Albright and Warden Timms want to control the situation and keep the gangs from retaliating.  It is these characters where Nate really shines in the book.  The prisoners and the staff are so well-rounded and their stories so interesting that I found myself wanting to read more about them and less about what happened when the sun went down.

Once the body count starts rising and the bodies themselves are vanishing, Father Albright works to form an alliance between the gangs to find the reason for the brutal attacks and killings happening at night within the prison.  Albright must do all this behind the warden’s back while he is trying to save his job from a governor who is quite upset about the murders in the prison.  The book follows the men on their quest to save the prison and the extent they can trust those who are their sworn enemies.  It all leads to a riotous conclusion that was both tightly written and satisfying.  Oh…and bloody.

Lights Out reminded me a lot of Salem’s Lot, which I consider ‘the” vampire novel after Dracula.  Like in Salem’s Lot, it is the build up of the characters and the slow burn that makes the book great.  The denizens of Burnham feel real and true.  Their distrust of one another and their forced alliance tightens the screws and doesn’t let up until the last page.  Overall, I highly recommend grabbing a copy and reading it, you won’t be sorry.  Thunderstorm Books still has a few copies, so click over and pick it up before it sells out.

Now as a special treat, Nate has agreed to enter The Arena to answer the 10 Questions!  So without further ado, here is Nate Southard:

1. After completing Lights Out, I was blown away by the way you put the monster back into the vampire. How did you prepare to write the novel?

-Honestly, I’ve never read many ‘romantic’vampire stories. The ones I always loved were things like Kin’s ‘Salem’s Lotand McKammon’s They Thirst, so I’ve always pictured vampires as brutal monstrosities. All of my preparation went into researching how things generally work in prison. Once I had a very basic outline in place, I put in Faith No More’s Angel Dust (which I listened to exclusively as I wrote the first draft), hit play, and got to work.

2. The characterization of the inmates, especially the gang leaders, is brutal and Burnham is such a rich backdrop. What planning and research went into the people who inhabit the prison?

-Well, I tried really hard to schedule a tour of a prison, but it appears the State of Texas doesn’t do such things. I interviewed a few people who’d worked as correctional officers to find out what a day in the life is like. I wanted to know things like how much freedom inmates have during the day, what happens during a lockdown, and a whole host of other things. The rest of it was deciding what these people had done, what they believed in, and what sort of moral code they upheld. To this day, Marquez is my favorite creation. I love his strange mix of anger, wisdom, and honor, all while capable of doing some truly horrific things.

3. While reading the novel, the character of Maggot reminded me of somebody. Is he your novel’s answer to Renfield in Dracula?

-I can see where he kind of fits that mold, but I really wanted Maggot to be the guy who probably should have wound up in a psychiatric hospital instead of a prison. He’s felt like a victim most of his life, and then he ends up in a place where he’s the ultimate victim. I’m sure there has to be people in prisons who are just terrified day in and day out. That’s Maggot.

4. I found This Little Light of Mine intriguing and at the end I wanted to go on further. The world you created within the parking garage seemed like a piece of a much bigger puzzle. Is it something you plan on returning to in the future?

-Good catch! This Little Light of Mine started as one-quarter of a novel called The Collapse, which would show a global apocalypse from four different places. My plan has always been to write four novellas and then splice them together like a movie. One of these days, I need to get around to writing the other three. They’re all in my head, just not on the page.

5. How do you go about writing a new Nate Southard novel. Do you plot out everything with an outline or do you just dive-in and let the story take you where it takes you?

-It depends on the piece. Some of my stuff, like Lights Out and Just Like Hell, got pretty sparse outlines. With Red Sky, all I knew was that I wanted to write one scene near the end of the novel. I saw something that just struck me as really horrible and beautiful at the same time, and I wanted to put it in a novel. I had to write about fifty thousand words to get there, but it turned out all right. Other times, I just start writing scenes that stick in my head until somehow they fit together and make sense. The title novella of my new collection, Something Went Wrong, was partially written that way.

6. I am a big fan of beer. How did your homebrew turn out?

-My first batch, a brown ale, turned out both delicious and potent, but it never did carbonate right, probably because of a mistake I made while bottling. Right now, I’ve got an IPA on storage that I’m hoping will get nice and fizzy in the next two weeks.

7. Don’t hurt me, but I haven’t got to Scavengers or Down yet. They are high the reading list though… What is on your reading list right now?

-I just finished reading Gillian Flynn’s Gone Girl, which is amazing from start to finish, and I’m getting ready to start John Horner Jacobs’ Southern Gods. After that, it’ll probably be some Laird Barron and Paul Tremblay, unless Sarah Langan has a novel coming out that I don’t know about. She always goes on top of the pile.

8. What upcoming projects do you have in the pipeline you haven’t been sworn to secrecy about?

-My new short story collection, Something Went Wrong, should be out from Thunderstorm Books in another week or so. Go look for it. The title novella is the most deeply personal thing I’ve ever written. After that, I have another zombie novel coming from Creeping Hemlock sometime in the next year or so. Everything else is half-finished or looking for a home.

9. Where can readers go to find out about everything Nate?

-I try to keep my website (www.natesouthard.com) updated nice and regularly, but people can also check me out of facebook (www.facebook.com/natesouthard) for semi-regular snark, song lyrics, and pictures of me going to food trailers. Also, I’m not one of those facebook folks who spreads a lot of memes, so you don’t have to worry about me clogging your news feed.

10. The last space…this is yours to say anything about anything.

-Everybody should check out my latest novel, Down (from Sinister Grin Press). It’s about a rock band whose plane crashes in a forest that contains some nasty surprises. I think it’s a big step forward for my fiction, and I hope everybody reads it.

One thought on “On “Lights Out” and Interview with Nate Southard!”