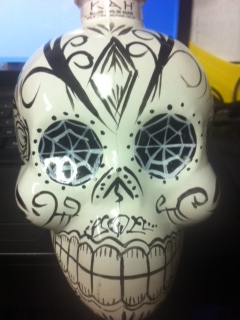 There a slight chill in the air at night, the warm days are feeling less and less like summer, and the aisles at the stores are filled with candy.  Ah my friends, fall is here and that means Halloween is around the corner!  Sure Halloween is one day on the calendar, but to some of us, it is a more than a day.

It is a way of life.

Do I put my skulls and horror films up because the calendar changes to November?  No, I let my Halloween flag fly all year round.  Think about it; there are no gifts, no fake happiness, and you can be yourself or whatever you want to be.  On Halloween, nobody judges you.  Want to wear that dress?  Do it.  Want to just go out in public and enjoy the sight of kids running around happy and content while Trick or Treating?  Do it.  Halloween is the one time we can go out and be what we want to be.  No cute sweaters and no wearing that one shirt because your grandmother bought it for you.  Wear those fangs and wear those bloody wound make-up applications.  Enjoy the season!

Starting in October, life will be a hectic whirlwind.  In October, the premiere issue of Pavor Nocturnus will be released and includes my story, “The Sleeper Wakes”.  There are also five more anthologies due up soon that will drop in either October or November.  This will be the third year I participate in the Coffin Hop web tour and there will be prizes and such for that week-long event.  I have a story in another secret book and I will let you guys in on that when I can.  Lastly, the “secret project” is complete and we are in the editing and final stages of getting all the fine print lined out.  Thirteen authors, one story, and all for a good cause.  Once the final pieces have put into place, there will be an official announcement and launch information.  It is an awesome book and I think it will blow a lot of people away.

On the WIP front, I’m digging into The Red Veil, and then there are a few short stories I want to write for sub calls.

On a sad note, it looks like two previously accepted stories will be reverting back to me because the contracted time to get the anthologies out will expire.  It’s a shame, I really liked working with the press and I wish those involved all the best.  The stories will either be shelved for now or reworked and included in a collection soon.

So, starting in October it is going to be a busy month.  That’s ok though, that means things are going pretty well.  I will leave you now to shop for foam graves and plastic skulls.  Go and pick up vintage Monster Cereal boxes and bring home some ghosts and ghouls.

Be good to each other and goodnight…